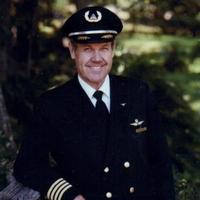 ROGER SCOTT   Enjoyed any type of flying   West Ossipee- Roger Eugene Scott, 86 passed away peacefully October 30.   He was born May 21, 1930 in Van Wert, Ohio to the late Francis and Pearl (Tomlinson) Scott as the sixth of seven children.   While in high school, he worked at a shoe shine parlor earning money to learn how to fly. Soon after graduating the Van Wert High School, he joined the Air Force and became a radio operator in a B-29 sending morse code messages.  He was honorably discharged as an Airman First Class from Randolph Air Force Base in San Antonio, TX in 1954.   He met his wife, Ann Rosenbach, and was married on September 3, 1955.   His career started with Northeast Airlines in 1958 as a co-pilot and then to be a captain. After Delta Air Lines purchased Northeast Airlines in 1972, he became a check airman.  In 1985, he became the Assistant Chief Pilot in Boston and then to be the Chief Pilot opening up the pilot base in Cincinnati, retiring in June 1990, at age 60.  Soon after he was chosen to be Vice President of Flight Operations for Pan American World Airways but the courts would not allow Pan Am to continue.  He then flew for a charter company in Lawrence, MA for 10 years.  Then in 2002, 2003, 2004 he flew a fire expert over forest fires in Pocatello, ID.  He loved flying his amphibian airplane or a favorite two seat tail dragger, the Swift.  He also liked fishing, hunting and skiing.   He loved and was loved by his family leaving his wife of 61 years, Ann, his younger brother Stanley, daughters Toni Scott, Tina Scott, Melissa Mckeagney and husband , Dave, a son Gregory and wife Alicia, along with grandchildren and great grandchildren.   Calling Hours will be 5-7 PM Sunday November 6 at the Baker-Gagne Funeral Home, 85 Mill St., Wolfeboro, NH.   Services will be 10:30 AM Monday November 7 at the Funeral Home followed by burial at 1:00 PM at the New Hampshire State Veteran Cemetery in Boscawen, NH.   In lieu of flowers, please send a donation in his memory to the Swift Museum Foundation, Inc., 223 County Road 552, Athens, TN 37303.
To order memorial trees or send flowers to the family in memory of Roger Scott, please visit our flower store.