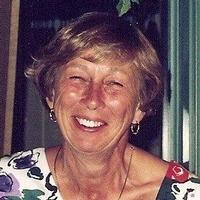 Elaine Hughes of Wolfeboro, New Hampshire died at the age of 80, on Wednesday November 2, 2016,   She passed peacefully in the comfort of her own bed, with her three children, and grandchildren there. She was also able to with speak with her beloved Don, many family members and friends the night before she left on November 2nd.   She was born in New Britain, CT daughter of the late Lynn Spencer and Edna (Benti) Postler. Though Elaine was born in New Britain, Conn. she spent most of her youth in the Syracuse, New York area until meeting her husband Donald G. Hughes and moving to Boston after they were married. They moved to Needham, Mass in 1971, while summering in Wolfeboro, NH in Port Wedeln, living there together with Don’s sister Lois & brother in-law Al Vater and nieces Carol Vater Merchant & Susan Vater Shadford, until moving to Wolfeboro permanently in 1989.     Elaine was known to many as a generous heart, gentle soul, and spirited “gamer” who never knew a stranger; from the grocery store line to every family and friend. She was everyone’s counselor and friend. A member of Kingswood Golf Club and enjoyed many years of golfing fun with her very special friends there, who remained loyal friends even when the golf was over for her. She was very active in the “First Night Wolfeboro” for many years.   Elaine lived for love, mystery and a great party! Certainly everyone who touched her life, enjoyed her home and hospitality. She was Christmas for our family, always making it the most special time of the year. Her smile and genuine compassion and caring for her family and friends will live on.   She’s survived by her husband Don Hughes of 56 years, 3-children, daughters Lynn Hughes Berger, her husband Bruce, of Wolfeboro, Barbara Hughes, Wolfeboro and son Bob Hughes and his 2-children, grandson Dana and granddaughter Jen, of Wolfeboro. She was predeceased by her brother Richard Spencer.   Visiting hours will be held at Baker-Gagne Funeral Home, 85 Mill Street in Wolfeboro on Friday November 11th from 10am-12pm. Funeral Services will be held immediately after at the First Congressional Church on Main Street in Wolfeboro, with services beginning at 1pm. In lieu of flowers Elaine would love to have any donations go to VNA Hospice of Southern Carroll County, PO Box 1620, Wolfeboro, NH 03894.
To order memorial trees or send flowers to the family in memory of Elaine Elizabeth Hughes, please visit our flower store.