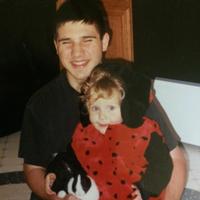 Jonathan Gordon LaChance, 31 years old, of 593 Union St, Manchester NH, died unexpectedly at home November 21, 2016, related to his combined illnesses of depression, substance abuse and addiction. He fought hard to overcome his demons for many years. It was not easy and yet somehow he would always find the courage and strength to keep fighting despite the setbacks and suffering he endured.   Jonathan was born March 27, 1985 in Nashua, NH. The son of Kristi (LaChance) Hardy and Glenn Hampoian.   Jon was a graduate of Kingswood Regional High School and attended NHTI. In his youth he enjoyed the many activities available in Wolfeboro such as parks and rec, baseball, skiing and as a Goalie with the Back Bay Hockey League. As a child, he was a sensitive soul, with a playful sense of humor and affectionate nature. He became an avid reader and blossomed under the care of his many talented and caring teachers despite having some learning disabilities and challenges in school. He had an ear for music, teaching himself to play the keyboard, singing in the choir and found solace in listening to an eclectic blend of musical genres, especially through his difficult times. Photography also became a creative outlet and he had an excellent eye for capturing the world-especially in his use of black and white photography.   Jonathan also had a deep love for his family-and they for him. He adored his younger sister despite the 14 year age gap-letting her invade his teenage space and steal his heart. He was particularly close to his maternal grandmother, Aunt, Uncle and Mother. Later in his life, his was reunited with his father Glenn, which brought him much happiness. As his disease took hold, it was devastating, not just for him but for all who knew and loved him. It tears at your soul to watch someone you love spiral into the hell that is addiction, to not be able to stop the destruction and in the end, although we loved him deeply we could not save him. We deeply mourn the loss not only of his physical presence but also the loss of all he had the potential to be and to offer the world.   Yet, we cherish the memories of him-particularly the times we had with him before his illnesses robbed him of the ability to maintain healthy relationships and boundaries. We choose to remember the periods of time that he held his demons at bay. It was during those times his soul broke free and he was beautiful, an amazing human being….funny, charming, thoughtful and intelligent. We were able to talk and laugh during those precious moments and in the end it is those moments of time in life that sustain us. In the memories we can smile through the tears. We will miss him more than words can say but he will live on in our hearts for always.   Jonathan is survived by his mother, Kristi (LaChance) Hardy and her life partner Roger Hardy of Wolfeboro, his beloved sister Ashley E. Ginter, also of Wolfeboro, His father Glenn Hampoian of Bedford, Maternal grandmother Carol LaChance of Londonderry, An Aunt Julie (LaChance) James of Manchester, an Uncle Michael LaChance of Goffstown along with several cousins and extended family.   A Memorial of life reception will be held at Nolan’s Restaurant in Wolfeboro NH, Saturday December 3rd, 2016 from 1 pm to 4 pm for all who might like to attend and honor Jonathan’s memory with us.   In lieu of flowers we would ask that you donate to Hope for NH Recovery at 267 Wilson St, Manchester NH, 03103. They are playing an integral role in bringing attention to the epidemic of addiction in our communities, providing resources and services to individuals and their families as well as partnering with other support services/treatment centers and hospitals to save lives and promote long term recovery from alcohol and drug abuse.   The Baker-Gagne Funeral Home is assisting the family with arrangements. The Family would like to thank Manchester Mental Health, Hope for NH Recovery, The Farnum Center, Manchester’s wonderful first responders’, Police officers, and countless Nurses’, Physicians’ and counselors’ who have done their best to help Jonathan and others in their communities who continue to struggle with mental illnesses and substance abuse.   To leave a message and sign an online guest book go to: www.baker-gagnefuneralhomes.com
To order memorial trees or send flowers to the family in memory of Jonathan Gordon LaChance, please visit our flower store.