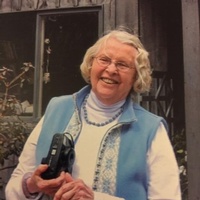 Barbara Burroughes Lloyd of Chocorua, New Hampshire, died peacefully surrounded by her family on November 20, 2017. She was 89 years old.   Loved for her humor and her unfailing ability to put anyone at ease, Barbara was a champion of family and friends whom she supported with generosity, love, and optimism. She had a genuine appreciation of people and loved sharing in their stories. Barbara inspired a strong sense of involvement and compassion in generations of family and friends. She treasured every individual for their unique contributions and spirit.   Born on February 1, 1928 in White Plains, New York to Clifford and Marion Burroughes, Barbara was brought up in Bronxville, New York and New Canaan, Connecticut. She attended schools in New Canaan and at Rosemary Hall in Greenwich, Connecticut, graduating in 1945. Barbara then went to the Ambler School of Horticulture, now part of Temple University, graduating in 1947, the start of a lifelong passion for plants, flowers, and gardening.   Barbara married the love of her life, Robert McAllister Lloyd on November 26, 1948 in New Canaan. Following their marriage, they lived in the Boston area, settling in Dedham, MA. Barbara and Bob brought up a family of five children in Dedham while devoting themselves to the local community. Throughout their years in Dedham, Barbara and Bob also spent time in the White Mountains of New Hampshire at Bob’s family’s vacation home in Chocorua.   Barbara and Bob established year-round residence in Chocorua, New Hampshire in 1974 in their beloved home Timberlea. Barbara put down strong roots in the local community. She was a member of St. Andrew’s-in-the-Valley in Tamworth. She created Queen Anne’s Lace, a floral business specializing in locally-sourced flower for bridal arrangements and other ceremonies. Barbara was the founder of Caregivers, a community organization providing a regional service to assist non-driving residents in their vital chores. Her efforts served as a blueprint for a locally oriented solution in rural communities. The Chocorua Community Association officially recognized Barbara’s contributions by bestowing upon her its “Citizen of the Year” award for outstanding service to the community in 2014.   After Bob’s death in 1997, Barbara continued to thrive in her residence on the edge of the lake with its pristine view of Mount Chocorua. She created a life that was proud of its independence while maintaining strong community involvement. Barbara had many creative pursuits in addition to gardening and landscape design. She had a wealth of talent for manys crafts, home design, and fine arts throughout her life. Increasingly, she enjoyed her hobby of rug-hooking, often hosting lively gatherings of like-minded rug-hookers.   Barbara’s family house was the scene of warm, joyous holiday celebrations with its famous 20-foot Christmas trees and holiday parties. Affectionately known as Baba, she inspired love and family warmth for everyone in her enormous family network, including many friends she considered as unofficial sons and daughters. On holidays and vacations, Baba’s house would swell to accommodate dozens of happy grandchildren, cousins, and friends. Summers would bring playful crowds for lake swimming, hiking, and huge family meals.   Barbara is survived by her five children, ten grandchildren, and three great-grandchildren. She also loved her step-great-grandchildren, nieces, nephews, and grandnieces and grandnephews. Barbara’s children are Sarah and Rick Hall of Wolfeboro, NH, Mac and Lucy Lloyd of Freeport, ME, Marion and Dean Salois of East Greenwich, RI, David and Carol Lloyd of Ipswich, MA, and Anne and Nick Witte of Cumberland, ME.   Her life will be celebrated December 9, 2017, at 11a.m., at St. Andrew’s-in-the-Valley, 678 Mt. Whittier Rd, Tamworth, NH. In lieu of flowers, contributions can be made to Tamworth Caregivers and/or the Chocorua Lake Conservancy.   The Baker-Gagne Funeral Home and Cremation Service in West Ossipee is assisting the family with the arrangements.   Please share your messages, stories, leave a short note and sign an online guest book at www.baker-gagnefuneralhomes.com
To order memorial trees or send flowers to the family in memory of Barbara Ann Lloyd, please visit our flower store.

St Andrews in the Valley Church