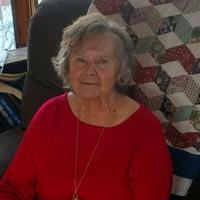 Beverly Doris Bernier (Taylor) passed away unexpectedly on May 29, 2017 at Huggins Hospital in Wolfeboro, NH surrounded by the love of many of her children, grandchildren and family.   Beverly was born in Westmoreland, NH on February 24, 1937, one of 6 children. She was raised in Milford, NH and was married for 60 years to Roland Bernier. She began raising her 6 children in Brookline, NH and moved the family to New Durham, NH in 1977 where she lived for many years before moving to a long time family property on Round Pond in Pittsburg, NH. She spent winters for many years on Marco Island, Florida, returning to the Wolfeboro area the last years of her life.   Beverly is survived by son Roland Bernier and wife Linda Bernier, of New Boston; son Kevin Bernier and wife Leslie Bernier of Wolfeboro; daughter Robin Joy and husband Richard Joy of Barrington; Son Raymond Bernier of Chyna, Maine; and son Shawn Bernier and wife Kristyn Bernier of New Durham. She was pre-deceased by her beloved son, Michael Bernier, who passed away suddenly in 2009. Beverly leaves 7 adored grandchildren, Emily Kelly, Gregory Bernier, Molly Bernier, Nicholas Bernier, Zachary Joy, Hannah Bernier and Jagger Bernier, and she was also blessed with 11 great grandchildren who brought her great joy.   Beverly is survived by her sister, Joyce Bird, of Lyndeborough, and was pre-deceased by siblings Ted Taylor, Bob Taylor, Bunny Lorenz, and Shirley McBaine. Beverly enjoyed reading and watching the sunrise with her morning coffee in Pittsburg, as well as many years of time spoiling her faithful companion, Molly, a rescued Jack Russell Terrier. The true joys of her life, however, were her 6 children, and spending time with her grandchildren and great grand-children and watching them grow.   The Baker-Gagne Funeral Homes and Cremation Service is assisting the family with the arrangements.   A memorial service will be held on June 5, 2017 at 2PM at the Baker-Gagne Funeral Home in Wolfeboro, NH.   Please share your messages, stories, or leave a short note and sign an online guest book at www.baker-gagnefuneralhomes.com
To order memorial trees or send flowers to the family in memory of Beverly Doris Bernier, please visit our flower store.