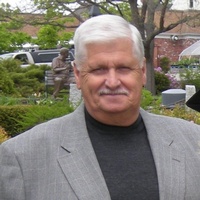 Bruce Walker, 75, of Butternut Lane, Tuftonboro, Died January 17th at Dartmouth-Hitchcock in Lebanon. Born in Detroit, MI, August 23, 1943, son of Edward Walker and Ann (Dubyk)Walker.   Raised in Michigan most of his life, he started out as a caddy for his father and enjoyed fishing, skiing and playing ice hockey. Golf later became a fond hobby in life. Hockey, which as a teenage in the midwest lead him to become Metro Junior A Hockey League. However his father said he should stick to his studies. Which he did, but always had a fascination and great talent for carpentry.   He went on to join the US Navy during the Vietnam War. Where he found the perfect niche between military, carpentry and building. in the United States Naval Construction Battalion. He was badly wounded in the war and was sent to Japan for hospitalization. They believed due to the injuries of his spine he may never walk again. He proved them wrong. This incident did not deter him. He had more than just the building, and military bug now. He was a jack of all trades though. Both he and his wife Mary "Jackie" Walker, have each lived ten lives. He was a cabinet maker, a truck driver, project manager of many schools and job sites in the U.S. He redid the spinning wires of the Golden Gate Bridge. He built the Panda Exhibit at the San Diego Zoo. Each of these things we have mementos of in our house like a museum. Pieces of history he contributed to. Until one day his wife Jackie pointed out a job with the State Department in construction. She said what do you have to lose? He applied for the job, nailed the interview and that is how an amazing international journey began. He went on to rebuild and do security hardening for United States Embassies. military barracks, guard towers, perimeter walls, mess halls, office buildings, roads, runways, all living quarters for military, family and staff alike and was even part of the Star Wars project in Kwajalein. In impoverished countries, especially with bad drinking water, house or water. He always came on time, if not early with projects, under budget and with parts to spar. Instead of wasting countless US dollars to ship the supplies back he would have his team often build water filtration systems, schools, and give the locals better supplies to patch their homes. In the end this was not only good for the locals but for the company as they could count this as charity. He received countless awards in his life time for his work overseas. In no particular order, countries he has lived and worked in include, Pakistan, Afghanistan, Iraq, Saudi Arabia, South Africa, Zimbabwe, Djibouti, Ethiopia, Marshall Islands, Japan, Thailand, Philippines, Turkey, Kazakhstan, China, Iran, South Korea, Kyrgyzstan, Istanbul to name a few. When he wasn’t overseas. He did actually run trucks with his wife Jackie in the US states. They ran pipeline and oil rigs from TX to the Alaskan highway as a husband and wife couples team. They ran a dairy farm together when they felt their daughter needed to understand what being an "American Child" was all about in the state of WI. In that time he did have to go back overseas to finish an urgent project in Thailand while his wife ran a campaign for labeling laws and the fight against BGH state side. It was not long before we joined him again. Eventually we all settled here in the state of New Hampshire close to a local job out of MA which was part of the Big Dig. Part of settling back in the United States was yet again to give their daughter a chance to have a normal teenage setting. We could not have chosen a more beautiful home. Bruce and Jackie were quite the comedic duo. They were always told they should right a book, be stand up comics, have their own reality show. Where ever they went people laughed at their interaction.   After Bruce lost Jackie in August 17, 2017. I believe he never got over being apart from her. Never got over her loss and his happiest moment is now being back with her forever and always.   He is survived by two sons Brian Walker of Medford, Mass. and James Walker of Cocoa Beach, Fla.; One Daughter Megan Walker of Tuftonboro NH. Visitation is Thursday January 24th, from 4PM-6PM at the Baker-Gagne Funeral Home, 85 Mill St, Wolfeboro.   Please share your messages, stories, or leave a short note and sign an online guest book at www.baker-gagnefuneralhomes.com
To order memorial trees or send flowers to the family in memory of Bruce Henry Walker, please visit our flower store.