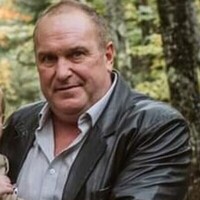 Christopher Robert Schneider, 60 years old, passed away unexpectedly at his home on Thursday, April 15. Born in Melrose on January 19, 1961, he was the son of Bob Schneider and the late Diane Schneider. Sadly, Chris’ mother Diane recently passed away on Tuesday, March 16 of this year. Chris was raised in Reading MA, but made his home in the Lakes Region of Freedom, NH. He was the owner of C.R Schneider Hardwood Flooring. Chris spent his life with his wife, Donna Tsoumbanikas. Chris was a free spirit who lived for adventure, whether it be snowmobiling, camping or being out on the water. One of his passions was spending time at NE Dragway with his parents and family. He spent summers out on the sand bars of Ossipee Lake and riding his Harley. Chris had a big heart and never hesitated to help anyone in need. Many locals knew Chris and the kindness he radiated to all. Chris is survived by Donna Tsoumbanikas, his children and grandchildren. Karissa Schneider and her son Ryker Dodier, Brandon Schneider and his son Jaxon Schneider. Donna’s children and grandchildren; James Tsoumbanikas and his son Tyler Mullen, her daughter Angela and her husband Dan Thornton, their children Michael Schneider, Jonathan Schneider, Aleana Schneider, Haley Valliere and Grace and Gail Thornton. His father Robert Schneider of Reading, MA, his brother Rodney Schneider, sister-in-law Christine and their children Emily and Matthew, his sister Therese Fontaine, her husband Robin and their children Ryan, Shawn and Kerri, his sister Heidi Francis, her husband Robert and their children Nicole, Amanda, Bryan and Jeff. He is also survived by several great friends and neighbors. People may pay their respects Friday, April 23, 2021 from 4-6pm at the Baker-Gagne Funeral Home, Rt 16. West Ossipee, NH. In lieu of flowers, donations can be made to the Baker-Gagne Funeral Home or to the Michael J. Fox Foundation for Parkinson’s Research, Attn: Donation Processing PO Box 5014, Hagerstown, MD 21741-5014. A remembrance & celebration of Chris’ life will be held during the summertime and under safer circumstances. To sign an online guest book, leave a message or condolences, go to: www.baker-gagnefuneralhomes.com
To order memorial trees or send flowers to the family in memory of Christopher Robert Schneider, please visit our flower store.