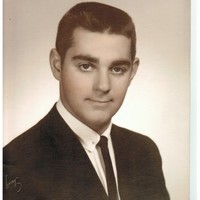 On Tuesday, December 24, 2019, Donald Allen Muscavitz (a “salty” member of our community), loving father of three children and two grandchildren, passed away peacefully at the age of 72, within the comfort of his children and nursing staff at Wolfeboro Bay Genesis. He was known best for his Musky Auto Body businesses in Wolfeboro, Tamworth, and on Sheridan Road, Moultonborough, New Hampshire. Donald was the adored son of Alphonse Muscavitz and Lillian Helen Zanckowsky of Lawrence, Massachusetts, both of Lithuanian heritage. He has two sisters, Brenda O’Leary and a predeceased sister Lisa Beth Kotch. He grew up in Lawrence, Massachusetts and graduated from Lawrence High School in 1965. He spent his childhood summers with his parents, siblings, and friends on Plum Island Newbury, Massachusetts.            Donald graduated from Belknap College, Center Harbor, New Hampshire in 1968 with a major in Biology and a minor in psychology, and was on The Belknap Ski Team. While attending Belknap College, he embraced his love of golf, the use of Lake Winnipesaukee in the summers swimming and winters ice fishing.            After graduation, Donald taught Biology in Bennington, Vermont, where he won The Best Teacher Award his second year of teaching. He continued his zest of adventure skiing the mountains along Interstate 93, and traveled to Costa Rica, Greece, Virgin Islands, and Puerto Rico. He was known well for the long drive to Costa Rica by car, and his comical stories of the escapade and encounters with the locals along the trip.            After these travels, Donald was drawn into his father’s, “Musky’s Auto Body” shop business . This became his life’s work, along with volunteering for the Wolfeboro Fire Department. He continued his passion of skiing and snowmobiling with his family and friends, and enjoying his motorcycle ride up to the summit of Mount Washington. He shared his life with Bonnie Tilton, and they had three sons: Donald, Jr., Corey, and Matthew Muscavitz. He enjoyed taking his family to the Daytona 500 and other styles of car racing. They spent many happy hours watching car races on land and on the ice. Bonnie and Donald raised and bred Pomeranians, Keeshond dogs and Siamese cats. He loved his animals both domestic and wild. Bonnie predeceased him in 2017. Donald continued to ski avidly with his friend Barr Kayser until he fractured his back at Cannon Mountain.            Donald is survived by his sons, Donald, Jr. of Moultonborough, NH, Corey and his wife Emily Muscavitz, their two daughters, Lillie and Mykela of Quincy, Illinois, Matthew and his wife Amy of Moultonborough, NH, his sister Brenda O’Leary, and his niece Jennifer O’Leary in Florida. Funeral arrangements are made by Baker-Gagne Funeral Home, Wolfeboro, N.H. An internment service will be June 6, 2020 at the Mason Cemetery on Sheridan Road, Moultonborough, N.H. at 11:00 a.m. Service will be led by Pastor Jeff Laliberte. In lieu of flowers, donations may be made to Moultonborough Meals on Wheels and Genesis Wolfeboro Bay. Please share your condolences, messages, stories and sign an online guest book at www.baker-gagnefuneralhomes.com
To order memorial trees or send flowers to the family in memory of Donald Allan Muscavitz SR, please visit our flower store.