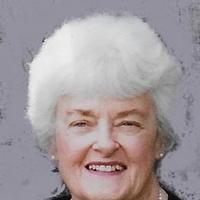 Dorothy Eleanor Sullivan (Burns) died on Sat. April 15 at the age of 90. Dottie was raised in Arlington, for, the most part, by her aunts, Mary, Harriet, and Agnes Burns, as were her two siblings, Margaret and John. She lived as a resident student from grammar school through high school at St. Annes Academy in Marlborough MA and graduated from Regis College with a degree in Home Economics. During her college years she met her lifelong love and husband, Daniel. They raised four children, Daniel, Mark, Greg, and Susan and lived in the same house in Arlington from 1950 until 1998. In later years they retired to homes on Merrymeeting Lake in New Durham NH and FT Myers FL which were their favorite places to be in alternating seasons. Among her favorite moments were those spent helping Dan plan and build the homes of their dreams in these locations, and being surrounded by family and friends when they often came to enjoy the beauty of the areas.   Dottie started her career as a dietician for the Carney Hospital in Dorchester, and continued to work as a professional dietary consultant to many nursing homes and hospitals while raising four successful children, always planning her schedules and time around their school schedules and needs. She ended her career as an ADA consultant dietician, planning menus for various nursing homes.   She is survived by her children Daniel and his wife Kathleen of Hull MA, Mark and his wife Lyn of New Durham NH, Greg and his wife Stephanie of Framingham MA, and Susan and her husband Dan of Manchester CT.   She has 10 grandchildren, Lauren and her husband David of Natick MA, Evan of Arlington MA, Jeffrey of Arlington, Matthew of Hull MA, Kelly of Derry NH, Chris of Weymouth MA, Reid of New Durham NH, and Shawna, Ryan and Corinne of Manchester CT.   A wake is to be held Friday, April 21 at the Baker/ Gagne Funeral Home in Wolfeboro NH. Visiting hours will be from 4-8pm. A funeral mass will be held at St Katharine Drexel Church on Sat. April 22 in Alton NH at 1:00 PM.
To order memorial trees or send flowers to the family in memory of Dorothy Eleanor Sullivan, please visit our flower store.