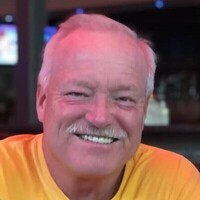 Douglas J. Hayes, former Nashua, NH Police Captain, of North Conway, NH, formerly of Hudson, NH has passed away peacefully at home after a ten-year courageous battle with cancer. Born April 27th, 1957 in Utica, New York, the son of Robert and Patricia Hayes of Sarasota, Florida. Doug graduated from Alvirne High School in Hudson and afterwards proudly served his country in the United States Army as a Military Police Officer. He continued his desire for policing, joining the Nashua, NH police force in 1980. He rose to the rank of Captain while serving within several divisions within the department. Doug enjoyed spending time with his family and friends camping in the White Mountains. He enjoyed the area so much that after retirement from the force, he and his wife, Dennise (Morris) decided to settle and make their home in North Conway. Doug met Dennise while both serving as police officers in Nashua. They had two children, Richard Hayes, currently of Hudson, and daughter Casey also of Hudson, both graduates of Alvirne High School. Doug was very proud of his children, Rick having served his country in the US Army and Military Police, serving two tours of duty in Afghanistan and daughter, Casey, who studied Human Communication and Culture at USF and traveled to numerous foreign countries like Thailand, Namibia, DRCongo and Nepal to teach, work and explore. Doug is also survived by his twin grandsons, Chase Anthony and Wyatt Douglas Hayes of Hudson, NH. Doug was predeceased by his mother-in-law, Erma Tieff and sisters-in-law, Raye Ann Charland and Johnna Tieff, Aunt Barbara Hayes and brother-in-law Jay O'Halloran. He is survived by his parents, Patricia and Robert Hayes, two brothers: Robert Hayes III and his son Nathan Hayes. Stephen Hayes and his three children, Theresa and her husband Tim Treptow and their son, Colin and sons Justin Hayes and Jonathan Hayes. Stephen's wife Lori and her four children Isaac, Alexa, Brigette, and Samantha. His sister Tamara and her husband John Wood and his uncle Richard Hayes and his daughter Barbara Pappas and her family. He is also survived by his sisters-in-law Dodi O'Halloran, Lynne Kennedy, Lee Batjiacka and husband Steve. His brothers-in-law Paul Morris and his partner Debbie Frasier, Milton Morris and wife Vickey, and Ronald Dubreuil and his wife Lori. Doug also has many more nieces and nephews. Services: One of Doug's final requests is to be waked at home in North Conway and celebrate his life. Calling hours will be Saturday, March 13th, 2021 and Sunday March 14th, 2021 from 11 AM to 4 PM. Burial will be held at the Veterans Cemetery in Boscawen, NH, Tuesday, March 16th at 1 pm. The Baker-Gagne Funeral Home on Route 16, West Ossipee, NH is in charge of assisting the family with arrangements. Condolences may be offered at www.baker-gagnefuneralhomes.com
To order memorial trees or send flowers to the family in memory of Douglas John Hayes, please visit our flower store.