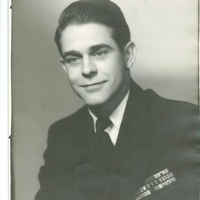 John J. “Jack” Fortier of Wolfeboro, NH, and formerly of Andover and Melrose, MA, passed away on June 4 at the age of 94. Born on October 6th, 1923 in Melrose. Jack was a member of the “Greatest Generation,” having enlisted in the U.S. Navy in 1941. He served during WWII in the North African campaign and in the Pacific until the end of the war.  He continued his service following the war as a Chief Petty Officer and served during the Korean conflict.  He was the recipient of many medals and honors for his service to his country.  He retired from the Navy in 1961 and went to work for Bay State York Refrigeration and later started and ran Bay State York Service Company.  He was President of ARCA and on the Board of Directors of the National Association of Air Conditioner Contractors.  In 1984, he started his own business, Air Filter Sales, that is now being run by his son, Paul. Jack married the love of his life, Virginia Lord, on August 7th in 1955. He and Ginny were blessed with four children who they raised in Melrose before moving to Andover in 1972. They also spent many happy summers at their cottage on Lake Ossipee in New Hampshire. Jack was an avid golfer, and he and Ginny were members at Kingswood Golf Club in Wolfeboro for many years. He was a weekly communicant at St. Katherine Drexel. They also spent many winters escaping the New England cold in Vero Beach and Marco Island, Florida, where they had many close friends and wonderful memories. Family was the most important thing in Jack’s life and he had a large one. He was one of 12 children born to William Fortier and Mary Donahue. He was pre-deceased by his siblings Josephine (Grant), Daniel Fortiere, Gertrude (Presper), Dorothy (Whitford), Rita (Fuller), Ann (Turner), William Fortier, Marjorie Fortier, Loretta (Dickson), Harold Fortier (Jack’s twin who died in infancy), and Barbara (Grant).                                 Jack is survived by his wife of 63 years Virginia (Lord) Fortier and his four children and their spouses, Jane Howe and her husband Tom of Bradford, MA, Paul and his wife Cyndy of Andover, Carol Davis and her husband Jim of Methuen, MA, and Christine Crittenden and her husband Michael of Bradford, MA. He is also survived by his seven grandchildren, Allyson (Fortier) Slater and her husband Alex of Los Angeles, Elizabeth (Fortier) Botsford and her husband Tripp of Boston, Jennifer (Crittenden) Lavallee and her husband Rob Lavallee of Haverhill, Michael Fortier and his fiancé Colleen Barry of Ipswich, John Davis of Boston, Kathleen (Crittenden) Boudreau and her husband Michael of Haverhill, and Christopher Davis of Methuen. He also leaves 2 great grandchildren. Jack is also survived by many nieces and nephews who looked to him as the patriarch of the large Fortier clan. His family will miss his love, wisdom, quiet leadership, and his famous Christmas Eve vest. But they will not miss losing to him at cribbage, where he rarely lost a hand. A funeral mass will be held at 11 am on Saturday, June 9, at St Katharine Drexel, 40 Hidden Springs Rd.,  Alton, NH. In lieu of flowers, memorial contributions may be made to the Life Ministries Food Pantry, 426 N. Main St., Wolfeboro, NH or Central NH VNA and Hospice, 240 S. Main St., Wolfeboro, NH.The Baker-Gagne Funeral Homes and Cremation Service of West Ossipee and Wolfeboro are assisting the family with the arrangements.Please share your messages, stories, or leave a short note and sign an online guest book at www.baker-gagnefuneralhomes.com
To order memorial trees or send flowers to the family in memory of John "Jack" Fortier, please visit our flower store.