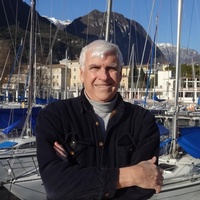 North Hampton - John Herbert Jenkins, 75, of North Hampton and Wolfeboro, died of unexpected heart complications on May 6, at Huggins Hospital in Wolfeboro.             John was born in Berea, OH on March 21, 1944. He was the son of the late John G. and Mae Leona (Achen) Jenkins. He and Cindy were married in 1965 in Rochester, NY and moved to North Hampton in 1968. They summered in Wolfeboro since 1978.             John retired as a pilot after 38 years with American Airlines. He began his career as a flight engineer on the propeller-driven DC-7 aircraft and retired as a Boston-based Boeing 777 Captain, where he was the most senior pilot at the company. During that time, he served as a mentor for countless pilots and had the opportunity to travel around the world.             John had many passions in life including commercial aviation, general aviation, and radio control flying. He maintained a runway and hangar in his back field, flying Piper Cubs and teaching his family to fly. He also loved collecting books, artwork and airline memorabilia. Throughout his life, spending time with family was always the most important thing to him and in his later years, his grandchildren became his priority. He could always be counted on at their hockey, lacrosse, baseball, soccer, and field hockey games. During his free time, he enjoyed traveling to see his family in Rochester, NY and Amsterdam, Netherlands. Each summer, the whole family gathered at his lake house in Wolfeboro, where John loved watching the family ski and swim.             Pre-deceased by sister Linda Sanford and daughter-in-law Bridget Jenkins, he is survived by his wife Cynthia (Humm) Jenkins, their son John G. Jenkins of North Hampton, their son Richard W. Jenkins and wife Isabel Jenkins of Exeter, daughter Linda M. Van Arsdale and her husband Joel Van Arsdale of Amsterdam, Netherlands, his sisters Carol Silvis of Fillmore, NY, Susan Jenkins of Brockport, NY, 7 grandchildren – Marley, Jack, Richard, Allegra, Maisy, Sophie, and Matthijs – and several nieces and nephews.             John touched the lives of everyone he interacted with and his humor, drive, and compassion will forever be remembered by those that knew him.             A Celebration of Life will be held Tuesday, May 14 from 5pm-8pm at The Sheraton Harborside Portsmouth Hotel.              Burial will be in Center Cemetery, North Hampton.             The Baker-Gagne Funeral Home and Cremation Service of Wolfeboro is assisting the family with the arrangements.   Please share your condolences, messages, stories and sign an online guest book at www.baker-gagnefuneralhomes.com
To order memorial trees or send flowers to the family in memory of John Herbert Jenkins, please visit our flower store.