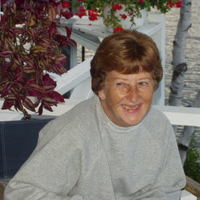 Joyce (Jones) Lampron, lifetime resident of Wolfeboro, died the morning of October 28th after a long period of declining health.   Daughter to Ernest and Lucy (Knights) Jones of Wolfeboro Falls, Joyce attended both Carpenter School and Brewster Free academy, graduating in 1958 where she was a member of the glee club, served on the yearbook staff and was voted “best natured” in her class. During her high school years she worked at Tobey’s pharmacy as a soda jerk, a job she continued with after graduating and often reflected back on as one of the best jobs one could ever have. The social atmosphere of the soda fountain was a perfect fit for the cheerful spirit and winning smile of the young Miss Jones.   These charms were not missed by Robert Lampron, a frequent patron and local electrician. They married in August of 1960, making a home on Clark Road and raising two daughters. While Robert worked his skills locally and at the Portsmouth Naval Shipyard, Joyce worked in the kitchen of Kingswood serving students of the high and middle school. Joyce loved working at the school and cherished the connections she made with those she worked with and served. Children and Joyce were always natural allies.   Through their years of marriage Joyce and Bob were active members of St. Cecelia’s church and served veterans and the town through the American Legion. While Bob served as Post commander, Joyce served as Treasurer.   The sudden passing of her husband in 1987 was an irreplaceable loss for Joyce; but her family grew shortly after as her daughters married and grandchildren became the new focus of her life along with quilting and observing local wildlife. Her love for Wolfeboro was deeply rooted through her family and the work she performed in this community. Daily walks downtown and up to Kingswood kept her connected to Wolfeboro even during her years of declining health. The beauty of the Lakes Region was a marvel she never took for granted. Often commenting “We really do live in a beautiful part of the world, don’t we?”   Joyce is predeceased by her parents Ernest and Lucy Jones, her Brother Stanton Jones, Sister Shirley (Bunny) Hudson, and her beloved husband Bob. She is survived by her daughters Karen Haeger and Carla Brewster and their Husbands Michael Haeger and Chris Brewster of Tuftonboro, NH; Grandchildren Nicole Haeger of Lewiston Maine, Brendan Haeger of Saco Maine, Tyler Brewster of Tuftonboro and Alex Brewster of Orlando Florida.   Calling hours will be at Baker Gagne Funeral Home 85 Mill St., Wolfeboro Friday Evening 5:00 – 7:00 and funeral services at Katherine Drexel Catholic Church in Alton Saturday at 10:00. Burial will be in Lakeview Cemetery Wolfeboro. Please share your condolences, messages, stories and sign an online guest book at www.baker-gagnefuneralhomes.com
To order memorial trees or send flowers to the family in memory of Joyce Jones Lampron, please visit our flower store.