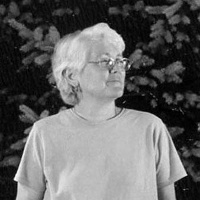 CONWAY, NH – Katherine Delaney Brown, artist, gardener, rescuer of cats, supportive mom, delighted grandmother and loving wife, quietly slipped away from this world in the early morning of August 23. At her side was her constant companion of 46 years, husband Ernie Brown.   Born September 1, 1953, Kate grew up in Hingham, Massachusetts and California. At 17, she became a student potter with Lynn Stanhope and Doug Elliot in Effingham, New Hampshire, a path that took her to David Baker’s weekly life drawing group in Jackson where she met Ernie. When she turned 18, they began their life together, marrying two years later in May 1973.     Art, family and home were the center of their lives. Kate and Ernie inspired a love of art and an independent spirit in both their children. Sienna Brown, PhD, is the Nancy E. Meinig Curator of Modern and Contemporary Art at the Philbrook Museum of Art in Tulsa, OK, while Thomas, trained as an architect, is a fine art handler and art show lighting designer, working for leading galleries and arts organizations in New York and Pittsburgh, Pennsylvania.   Kate’s creativity took her in many directions. She was a paper collage artist, printmaker, painter, and landscape and garden designer. While she had no formal training in art, she was a natural student with a fierce desire to learn and a solid work ethic. She worked as a set painter at Heritage and Story Land, as a graphic artist for Yield House, State Line Tack, Walsh Publishing in Portland, Glen Graphics, and for Pat Goodwin with White Mountain Puzzles, and she was the photography director for Gardeners Supply catalog for 10 years.   An avid fan of film and theater, Kate was the projectionist and manager for the Majestic Theater in Conway and, on a volunteer basis, the set decorating director for Burlington, Vermont’s Lyric Theater, an ambitious community theater group that routinely plays to sold-out audiences. Another passion, gardening, led her to be a community garden coordinator in Burlington, where she taught and inspired many fledgling gardeners.   Kate had a gift for creating homes—and she and Ernie lived in many, from their first apartment over the Wooden Soldier in North Conway to the five houses they purchased and renovated—four in Conway and one in Burlington, Vermont. With her design vision, the three-story barn on Davis Hill was transformed into a comfortable family home surrounded by expansive perennial and vegetable gardens. The barn was connected to her mother, Liz’s, home, an arrangement that gave the three generations important time together. Kate baked bread, dug in the dirt, and “put up” enough of the garden’s bounty to take them through the winter. She made Sienna and Thomas’s clothes, shepherded them through school, worked, and took in every abandoned animal the children brought home.    With Sienna and Thomas in college and graduate school, Kate and Ernie moved to Burlington so Kate could work at her dream job, with Gardeners Supply. Ten years later, they decided to “return to the tribe,” the family of friends they’d made during their many years in Conway. After looking at 26 houses, they chose one in Conway Village with ample space for an ambitious vegetable garden. Once again, Kate directed the needed renovations, working with Thomas on the design of a new kitchen, and with Ernie on creating a productive garden.   A long-time cancer survivor, Kate took her diagnosis in May in stride, displaying her usual calm yet feisty spirit and straight-up truthfulness. She and Ern viewed the following months as a gift, with time for family and friends; and since she’d always loved the ocean, they spent some wonderful days on the Maine coast. Throughout, Kate’s dry sense of humor and sense of proportion were in evidence, as was her “blue-eyed Irish stare,” a look that could stop her children—and likely anyone else she trained it on—in their tracks.   Treasuring their memories of Kate are her husband, Ernest O. Brown of Conway; daughter Sienna Brown, her husband Dante Blando, and their son, Gregory of Tulsa, Oklahoma; son Thomas, his wife Jessica Alpern Brown, and their son, Hudson, of Pittsburgh, Pennsylvania; brother John Delaney and his wife, Susan Rajus, of Harvard, MA; cats St. Ray and Ree; the extended Delaney and Brown families, and her many friends. Kate was predeceased by her father, John Joseph “Jock” Delaney, mother Elizabeth Knight Delaney and brother Thomas Delaney.   The Baker-Gagne Funeral Home of Wolfeboro is assisting the family with the arrangements. To share your messages, stories, or leave a short note and sign an online guest book, go to www.baker-gagnefuneralhomes.com.   Following Kate’s wishes, an informal gathering is planned for 1-4pm, October 15 at 106 River Street, Conway. This is a chance to talk with friends, long-lost relatives and perfect strangers. In lieu of flowers, please consider making a gift in Kate’s memory to the Conway Area Humane Society.   Those who knew her could generally count on Kate for the last word. Recently Kate asked Ern, “What haven’t you done that you’ve wanted to?” “Paint en plain air, dear.” “Then do it!” Kate replied. If in the future you see Ernie painting outdoors in the Valley or at the ocean, know that Kate is with him. And if there’s something you haven’t done that you’ve wanted to, do it!
To order memorial trees or send flowers to the family in memory of Katherine Delaney-Brown, please visit our flower store.