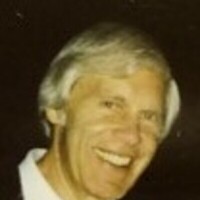 Kenneth Trafton Pinhero died of natural causes on May 23 in Meredith, N.H. at the age of 97. Born in Gorham, N.H. in 1923, he grew up in Penacook, N.H. and lived in Portsmouth, N.H. with his family for over 50 years. He was the only child of George and Maida (Trafton) Pinhero. Ken was married for 54 years to Barbara (McNair), who pre-deceased him in 2006. He is survived by his son Kenneth of San Leandro, CA, his daughter Janice and her husband George Fardelmann of Olympia, WA, his daughter Amy of Tuftonboro, N.H., grandchildren Bo Lassiter, Lilia Lassiter, Nathan Braun, and Adam Braun, one great-grandson, Aurelio Lassiter, and 5 nieces and nephews. Ken’s high school yearbook reveals a boy actively involved in many clubs and a sprinter on the track team. He graduated from UNH and saw war up close in the South Pacific as a lieutenant in the Navy during World War II. He later served with the U.S. Coast Guard Reserve and reached the level of Lieutenant Commander. Employed by Allstate Insurance for many years, Ken was active at St. John’s Episcopal Church in Portsmouth and St. George’s Episcopal Church in Durham for most of his life. At St. John’s he served on the vestry and volunteered to play the organ at early Sunday services for many years. He wanted to be remembered as “a good churchman.” Ken held various leadership roles in the Portsmouth Kiwanis Club (later serving a term as a New England region Lieutenant Governor). Blessed with a life-long love of music, Ken played the piano and organ, sang in church choirs and at least one Barbershop Quartet, volunteered to entertain residents at Nursing homes, and provided years of entertainment to his family. Still singing in a choir into his 80’s, he was able to do so by performing tenor, baritone, and bass parts with equal comfort. The staff and residents at his Assisted Living facilities enjoyed his musicianship also. Ken loved his home state of New Hampshire and celebrated, along with his wife, Barbara, Portsmouth’s rich history. He collected antiques, including “Portsmouth Collectibles,” and early New England reed organs, melodeons, and harmoniums. He valued staying healthy (having been treated with chiropractic care in the 20’s and discovering yogurt in the 50’s), and, until he turned 90, walked the beaches of Rye and jogged around his yard. He took great pride in giving to the community and was active in fundraising for good causes and his church. Many people commented on his “gentlemanly” qualities and many more enjoyed his ability to make people smile and laugh. He loved telling a good joke and driving his 1959 Triumph convertible along the coastal roads of Maine. Ken’s family wishes to thank the wonderful staff and caregivers at Sugar Hill Retirement Community in Wolfeboro and Forestview Manor Assisted Living in Meredith for the care and support given to him, and them, over the years. Contributions in his memory can be made to the National Resources Defense Council or Crossroads House, Portsmouth, N.H. Burial will be private. A celebration of life will be held at a later date. The Baker-Gagne Funeral Homes and Cremation Service of Wolfeboro is assisting the family with the arrangements. Please share your condolences, messages, stories and sign an online guest book at www.baker-gagnefuneralhomes.com
To order memorial trees or send flowers to the family in memory of Kenneth Trafton Pinhero, please visit our flower store.