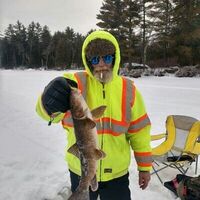 Kevin Daniel Philibert, 61, of Depot Rd., Tamworth, NH, passed away Saturday April 10, at Huggins Hospital in Wolfeboro. Kevin was born in Manchester, NH on September 24, 1959 to Paul M. Philibert and Beverly J. (Duston) Philibert, he grew up with 3 brothers and one sister. Kevin has always been a free spirit, he wanted to live life to the fullest. Money and materialistic things were never important to Kevin, he loved his family and wanted to travel and explore the world, and he did just that. He was full of adventure and life experiences. When Kevin moved to Tamworth he started his own contractor business. He lived in Tamworth for the past 25 years, where he raised 3 sons. He has always been an avid outdoors man. You name it, Kevin did it. He especially loved hunting and fishing and sailing. He always had a boat in his yard. Kevin spent his time working on new projects around the house, hanging out with his birds or shooting his guns in the backyard with his sons. If he wasn’t home, you could often find Kevin at White Lake State Park out on his kayak, fishing or swimming. He even had the coolest big red fishing/camping van around town. He lived one day at a time, going wherever he desired and doing whatever made him happy. His favorite past time of all though, was spending time with his grandchildren. Kevin was a great father, grandfather, brother, son and friend. He will be truly missed by all, his care-free adventurous spirit will live on through his friends and family. Pre-deceased by his father, Paul Philibert. He is survived by his mother Beverly Philibert of Manchester, his 3 sons Cody Philibert of Conway, Brandon Philibert of Tamworth, Zachary Philibert of East Wakefield, 3 brothers Paul Philibert, Wayne Philibert, Jeff Philibert, his sister Donna Michaud, and his 3 grandchildren Avery, Nova and Cole. Calling Hours will be Friday, 11:00 AM to !2:00 PM April 23rd 2021 at the Baker-Gagne Funeral Home 2395 White Mountain Highway, Route 16, West Ossipee, NH. To sign an online guest book, leave a message or condolences, go to: www.baker-gagnefuneralhomes.com
To order memorial trees or send flowers to the family in memory of Kevin Daniel Philibert, please visit our flower store.