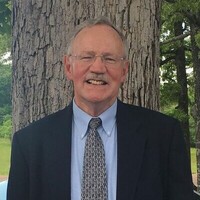 Lester Kerry (L.K.) Jones of Stow, Massachusetts and Moultonborough, New Hampshire passed away on July 18, 2022 in Moultonborough. Lester was born on November 4, 1945, growing up on a farm in Pocahontas, TN. After graduating from Middleton High School in Middleton, TN in 1963, he served overseas and domestically in the United States Air Force from September 1963 to September 1967 where he rose to the rank of Sergeant while specializing in radar communications. Following his honorable discharge from the service, Lester attended Tennessee Technological University by way of the GI Bill and completed his Bachelor’s degree in Electrical Engineering in 1974, graduating at the top of his class. He completed his Master of Science in Electrical Engineering from Northeastern University in 1979 while employed by RCA at MIT Lincoln Laboratory. His work eventually shifted to secure telephone communications for the National Security Administration, including the design of encrypted telephones used by NATO countries; he was proud of his photograph showing then-President Reagan using one of his telephones. In later years, this work afforded him the opportunity to visit various European countries before retiring from General Dynamics in 2009. Shortly after arriving in Massachusetts, Les met his wife of 46 years, Marion Manos Jones. They were married in December of 1975 in Lexington, MA. Their three daughters were born and raised in Concord, MA, until the family moved to Stow in 1993 as they “could no longer afford the life to which they would like to become accustomed” in Concord. The story goes that while he moved to Massachusetts with only two suitcases, it took two moving trucks to transition from Concord to Stow. In addition to being known for his dry humor (for which all Joneses might be known), like a true engineer Les was able to fix just about anything. He designed his first pre-fabricated home in Moultonborough, and enjoyed the years completing all of the interior finish work while spending summers with his family on Lake Kanasatka. Following two decades of cruising around the lake while towing his children and their friends on tubes and water skis, his wife surprised him with a Boston Whaler in 2016 – a boat about which he would regale friends and family with tales of shenanigans from his stint working on Kwajalein to convince anyone who might come aboard that a Boston Whaler cannot sink. Sharing time at the lake with his grandchildren in recent years was one of the many great joys of his life. In retirement, Les also continued to read many books with a particular interest in history; he watched many, many old westerns (ensuring his family could quote John Wayne movies and rerun episodes of Bonanza by heart); and puttered around the houses working on various improvement projects. Lester is survived by his wife Marion Jones of Stow, MA and Moultonborough, NH; daughters Helen Jones of Stow, MA, Melanie (Eric) Parker of Tewksbury, MA, Stephanie (Brock) Labadie of Newmarket, NH; grandchildren Daphne Jayne Labadie and Jack Caywood Labadie; sisters Annie Belle Norvell of Walnut, MS and Linda Tillman of Bolivar, TN; and an abundance of nieces, nephews, and cousins. Lester was predeceased by his parents Bruce Caywood Jones and Inous Lillian Jones, and siblings L.B. Jones, Geneva Weaver, R.G. Jones, J.A. Jones, B.C. Jones, and Imogene Woods. Reverend Ron Norvell, nephew of the deceased, will conduct the funeral service with full military honors to take place at 2:00pm on Tuesday, July 26, in the chapel of the New Hampshire State Veteran’s Cemetery at 110 Daniel Webster Highway, Boscawen, NH. In lieu of flowers, the family requests donations in memory of Lester be made to the USO (https://www.uso.org/donate/memorial-donation with tribute cards addressed to 61 Birch Hill Rd. Stow, MA 01775); Lester fondly remembered many USO shows while serving overseas during Vietnam, including when he met Ricardo Montalban who he always described as a really nice guy. Donations may also be made to a charity of your choice. To view an online memorial, leave a message of condolences or for more information go to: www.baker-gagnefuneralhomes.com
To order memorial trees or send flowers to the family in memory of Lester Kerry Jones, please visit our flower store.