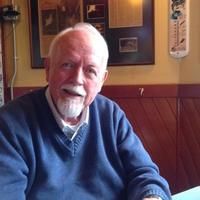 Wakefield, NH-Patrick William Cullinan, 77 of Wakefield died April 18, 2017 at his home with his loving wife Mary at his side after a brief illness.   Born in Lowell, MA October 22, 1939 son of the late Charles J. and Katherine P. (Tucker) Cullinan he grew up in Chelmsford, MA, graduated from Chelmsford High School in 1958 and went on to attend UMass Lowell Campus.   He served his country during the Vietnam Conflict with the United States Air Force and was stationed in Italy.   In 1965 he married his wife of 52 years Mary L. Crowley. They lived in Lowell for 10 years followed by 10 years in Hyannis, MA before moving to Wolfeboro in 1987.   Patrick owned and operated Parsons Furniture in Wolfeboro from 1987 until 2015. In Lowell he was a salesman for Household Furniture Company and in Hyannis he was the General Manager of Meyers Furniture.   He served as the President of Lowell Kiwanis Club from 1976 to 1977 and he served as President of the Hyannis Kiwanis Club from 1980 to 1981. In Wolfeboro he was a member of the Wolfeboro Rotary Club.  He enjoyed his family, boating, fishing and growing his business.     He was pre-deceased by his sister Kathleen Avila and his brother Robert J. Cullinan, he is survived by his wife Mary L. (Crowley) Cullinan, 4 sons Patrick Michael and his wife Barbara Cullinan of Cottage Grove, MN, Charles Daniel and his wife Melissa Cullinan of Merrimack, NH, Sean Christopher Cullinan of Brownfield, ME and Timothy Robert Cullinan of North Conway, NH. As well as 9 grandchildren John and Andrew Cullinan, Autumn Lea Bickford and her sister Amelia Bickford, Megan Taylor Cullinan-Newton, Timothy R. Cullinan Jr and Aubrey Page Cullinan, Thomas L and Hailey E. Cullinan.   Calling hours will be 4-8 PM Friday April 28 at the Baker-Gagne Funeral Home and Cremation Service 85 Mill St., Wolfeboro, NH.   A Memorial Service will be 10:00 AM Saturday April 29 at the Church of St. John The Baptist, 118 High St., Sanbornville, NH Burial will be in the NH State Veterans Cemetery at a later date.   The family would like to thank Wentworth Home Care and Hospice of Dover, NH.   In lieu of flowers donations may be made in his memory to Doctors without Borders or a Hospice Facility of your choice.   Please share your messages and stories, leave a short note and sign an online guest book at www.baker-gagnefuneralhomes.com
To order memorial trees or send flowers to the family in memory of Patrick William Cullinan, please visit our flower store.

Church of Saint John the Baptist