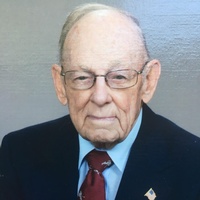 Laconia, NH - Richard M. Calvert, 95 of Ledges Drive, Laconia, died September 20, 2018, at the Taylor Community in Laconia. He previously resided in Tuftonboro and Wolfeboro, having moved from Massachusetts in 1986. Dick was born in Lawrence, MA, on June 11, 1923, and was predeceased by his parents, Arthur and Rose (Wilfert) Calvert. He graduated from Lawrence High School in 1941 and later attended Boston University. In 1943, he enlisted in the 10th Mountain Division and was a Communications Specialist in Headquarters 2nd Battalion, 86th Infantry Regiment during WWII. He was honorably discharged in November of 1945. Dick was employed by the Andover Insurance Companies, Andover, MA, as a Claims Manager. He received his CPCU designation in 1962. In 1968 he associated with Gordon Boyd & Co., Inc, Independent Insurance Adjusters, located in Boston, MA. He served in several managerial positions including Executive Vice President and General Manager of the firm which included 35 branch offices all over New England. He was named President of the Corporation in 1982 and retired in 1986. Dick held memberships in the National Association of Independent Adjusters, Inc., International Institute of Loss Adjusters, Inc., The Loss Executives Association, The Society of Chartered Property and Casualty Underwriters, National Association of the 10th Mountain Division, Inc., US Ski and Snowboard Association, Federation of Fly Fishers, and Trout Unlimited. He was also an active member of the Melvin Village Community Church and had served on many boards, most recently on the Board of Deacons, helping to care for the needs of the community. His belief in God guided all of his life's actions, from family life and values to spiritual and moral integrity. Dick was a life-long avid skier, and lived for the winter months when he would race the USSA Masters' race circuit, competing and often winning in his age group. He continued racing into his mid 90's, competing in his final race at the Hannes Schneider Meister Cup Race at Mt. Cranmore in March of 2018. He also loved to fish for trout and salmon, often with friends, both in New Hampshire and Maine, and would tie his own flies and lures. Dick is survived by his loving wife, Mildred (Lorenz) Calvert, with whom he shared 74 years of love and companionship. Dick and Milly had a truly storybook marriage, meeting as teens and knowing they were truly meant for each other. Family members include a son, Richard A. Calvert and his wife Carol of Collegeville, PA, a daughter, Linda E. and her husband David B. Prescott of Groveland, MA, and two grandchildren, David R. Prescott and his wife, Bridget of Charlestown, RI, and Lori B. and her husband Scott Davidson of Natick, MA. Great grandchildren include Matthew R. Davidson, Connor B. Prescott, Kaia E. Prescott, and Kaden M. Davidson. A Celebration of Life Service will be held on Saturday, October 6, 2018, at 11 AM at the Melvin Village Community Church, 476 Gov. Wentworth Hwy, Melvin Village, NH, 03850, followed by burial in the Melvin Village Cemetery in the rear of the church. In lieu of flowers, donations may be made in his memory to the Melvin Village Community Church. The Baker-Gagne Funeral Homes and Cremation Service of Wolfeboro is assisting the family with the arrangements. There will be no calling hours. Please share your messages, stories, or leave a short note and sign an online guest book at www.baker-gagnefuneralhomes.com
To order memorial trees or send flowers to the family in memory of Richard M. Calvert, please visit our flower store.