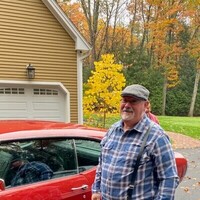 Richard Sebastian Triconi, Jr. of Tuftonboro, New Hampshire, fell asleep with the Lord on Sunday, August 15th, 2021 with his family by his side. Richard was born in Newton, Massachusetts on June 17th, 1960, to Richard Sebastian Triconi, Sr and Natalie (Castoldi) Perkins. He is survived by his parents and predeceased by his stepfather, Forest Perkins; his wife, Dawn-Marie (Badami) Triconi; his son Christopher Triconi and his wife Elizabeth; his beloved granddaughter, Natalie and grandson, Edward and stepdaughter, Nicole Badami; his sisters Cheryl Swansburg and Pamela (Castoldi) Heath and her husband Philip; his favorite niece Shauna Swansburg and nephews, Justin Swansburg and Andrew Swansburg along with many aunts, uncles, cousins, and other family. Richard was raised in Wolfeboro, NH graduating from Kingswood Regional High School, Class of 78. Throughout his life, he enjoyed many entrepreneurial endeavors, with his favorite passion as a Jeweler. He was hard-working and strong-willed; who would always overcome difficulties or challenges whenever faced. Richard enjoyed many hobbies, with his most passionate being: classic cars and cooking. He shared a 1971 Chevelle with his son, Chris for over 20 years. So many great stories and memories with Chris and (Expletive) Peter Olivier, whom the car could not run without. He spent many years hosting and attending car shows throughout New Hampshire and Florida with his best friends Curt and Emily Thomas. Richard loved to spend his days trying and creating new recipes in the kitchen. You were never 100% sure on exactly what was in “Triconi Surprise” or how much butter was in it, but you were confident that it was going to be delicious and you would have a boat load of leftovers. Being with friends and family was always most important to Richard, cooking family meals every weekend, cribbage at the lake, late night board games with the Predko’s, or events at Lead Foot City in Brooksville, Florida. Wherever he was, if you were with him, you know you were having a good time. Richard retired to Spring Hill, Florida where he continued his passion for cooking with his food truck, feeding the students at Pasco Hernando State College. Home of the Feta Fries. Everyone knew Richard as a kind, generous, honest and devout Orthodox Christian. His big heart, quick wit, infectious smile, and his love for his family will be dearly missed. Richard was an active member of Taxiarchai Greek Orthodox Church in Laconia, NH and Christ the Savior Greek Orthodox Church in Spring Hill, FL. Richard fulfilled many roles at both churches including serving on the Parish Council, the Building committee, Greek Festival committee, Stewardship committee and served on the Altar. In lieu of flowers the family respectfully requests donations be made in his memory to Christ the Savior Greek Orthodox Church http://christthesavior.info/stewardship/ or the Leukemia and Lymphoma Society https://donate.lls.org A memorial service will be held at Taxiarchai Greek Orthodox Church, Saturday, August 21st, 2021 at 11am, with refreshments served immediately following. A second service will be held at Christ the Savior Greek Orthodox Church in late September with a date to be announced. May his memory be eternal. The Baker-Gagne Funeral Homes & Cremation Service is assisting with the arrangements. To sign an online guest book, leave a message or condolences, go to: www.bakergagnefuneralhomes.com
To order memorial trees or send flowers to the family in memory of Richard Sebastian Triconi JR, please visit our flower store.