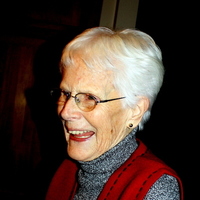 Ruth Ernestine (Flint) Belding, 97 passed away with her children by her side at Mt. View Community, Ossipee, NH, Monday, December 30, 2019.  Ruth was born December 13, 1922 in Braintree, MA, where she lived most of her childhood and graduated from Braintree High School. She was the daughter of the late Ralph and Fredricka (Parker) Flint.  Ruth was pre-deceased in November, 2003 by her loving husband of 61 years, Raymond Leslie Belding, Jr.  She is survived by her 3 children, Raymond Belding, III and wife Toni of Boxford, MA, Janet McDonald of Rochester, NH, Shirley Alessandroni and husband David of Wolfeboro, NH, five grandchildren, Devon Champlain, Cord Belding, Staci Smith, Blake Alessandroni and Shelby Alessandroni and several nephews and great niece and nephews. She was also pre-deceased by her sister Evelyn (Flint) Ross.  Ruth and Ray’s families were good friends and spent their summers together camping in Popponesset, MA.  In later years Ray and Ruth married and raised their family in South Weymouth MA and eventually Plaistow, NH.  The family spent their summers on Lake Winnipesaukee at Lanes End in Melvin Village, NH and later in Moultonboro, NH.  After retirement they lived in Tuftonboro and Wolfeboro, NH and in Winter Haven, FL during the winter months.  Ruth loved playing golf year round, square dancing, spending time with her family and socializing with friends.  She was a loving, devoted and nurturing wife, mother, grandmother, aunt and friend.  Her presence and beautiful smile will be missed.  There will be a memorial service on Saturday, January 25th at 11:00am at The First Christian Church of Wolfeboro, NH. A private graveside service will be held at The Town House Cemetery, Tuftonboro, NH later in the spring.  In lieu of flowers the family is asking for a donation to Mt. View Community, c/o Friends of Mountain View, P.O. Box 264, Ossipee, NH 03864.  Email: fomvc10@gmail.com   The Baker-Gagne Funeral Home of Wolfeboro is assisting the family with the arrangements.  Please share your condolences, messages, stories and sign an online guest book at www.baker-gagnefuneralhomes.com
To order memorial trees or send flowers to the family in memory of Ruth Ernestine Belding, please visit our flower store.