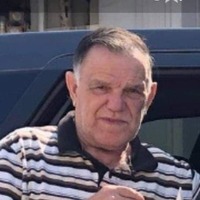 Vincent Elwin Elliott Sr. 79 yrs old of Wolfeboro, NH died peacefully at his home on December 12, 2020. He was born in Wolfeboro, NH on April 21, 1941, the son of the late Henry and Agnes (Welch) Elliott. Vinnie was a professional logger by trade, he preferred the old fashion way with horses and did so for many years. He enjoyed going to all the fairs to watch the horse pulls. Vinnie was predeceased by his brothers, George Elliott and Henry (Sonny) Elliott, His daughter Shirley Lee Elliott and a great granddaughter Autumn Lynn Elliott-Debow. He is survived by his wife of 22 years Golden Elliott. His children Vincent (Bubba) Elliott Jr. and his wife Michelle Elliott of Effingham, NH. His daughter Cynthia (Cindy) Elliott and her partner Mark Stevens of Wakefield, NH. His step children Sherry, Doreen and Dean. He was truely loved and will be missed greatly by his grandchildren Daniel (Shaina), Ryan (Lexi), Cody (Stephanie), Brianna (Pete) and Wyllow. His great grand children Piper, Bellatrix, Lilly, Wesley, Eliot and Amara. Many step grandchildren and step great grandchildren, Monica, Christopher, Brickton, Charity and many many more. His brothers Richard and Dottie of Vermont. Micheal and Jo of Alabama. His Sisters, Ellen Varney of Florida. Mary and Mike Connolly of New Hampshire. Many Cousins, Nieces and Nephews. Graveside Services will be held Wednesday, December 16, 2020 at 11AM. Pine Hill Cemetery in Wolfeboro Falls, NH. A gathering after the services will be held at 230 Trotting Track Rd. Wolfeboro. Arrangements have been entrusted to Baker-Gagne Funeral Homes of Wolfeboro and West Ossipee. Condolences may be shared online at www.baker-gagnefuneralhomes.com
To order memorial trees or send flowers to the family in memory of Vincent Elwin Elliott, please visit our flower store.